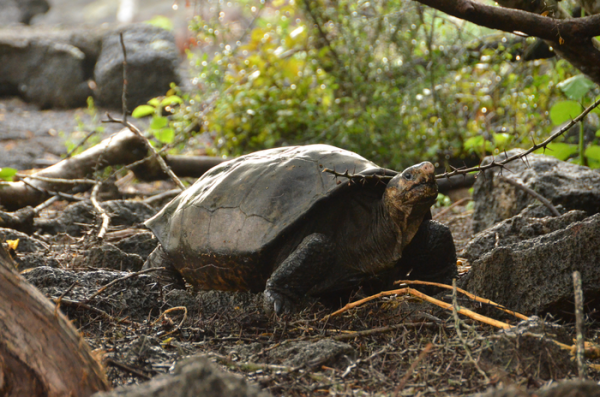 A tortoise from a Galápagos species long believed extinct has been found alive and now confirmed to be a living member of the species.

A tortoise from a Galápagos species long believed extinct has been found alive and now confirmed to be a living member of the species. The tortoise, named Fernanda after her Fernandina Island home, is the first of her species identified in more than a century.

The Fernandina Island Galápagos giant tortoise (Chelonoidis phantasticus, or “fantastic giant tortoise”) was known only from a single specimen, collected in 1906. The discovery in 2019 of a female tortoise living on Fernandina Island provided the opportunity to determine if the species lives on. By sequencing the genomes of both the living individual and the museum specimen, and comparing them to the other 13 species of Galápagos giant tortoises, Princeton’s Stephen Gaughran showed that the two known Fernandina tortoises are members of the same species, genetically distinct from all others. He is co-first author on a paper in the current issue of Communications Biology confirming her species’ continued existence.

“For many years it was thought that the original specimen collected in 1906 had been transplanted to the island, as it was the only one of its kind,” said Peter Grant, Princeton’s Class of 1877 Professor of Zoology, Emeritus and an emeritus professor of ecology and evolutionary biology who has spent more than 40 years studying evolution in the Galápagos islands. “It now seems to be one of a very few that were alive a century ago.”

When Fernanda was discovered, many ecologists doubted that she was actually a native phantasticus tortoise. She lacks the striking saddleback flaring of the male historical specimen, though scientists speculated that her obviously stunted growth may have distorted her features. Tortoises can’t swim from one island to another, but they do float, and they can be carried from one Galápagos island to another during hurricanes or other major storms. There are also historical records of seafarers moving the tortoises between islands.

Image: Fernanda, the only known living Fernandina giant tortoise (Chelonoidis phantasticus, or “fantastic giant tortoise”), now lives at the Galápagos National Park's Giant Tortoise Breeding Center on Santa Cruz Island. Fernanda, named after her Fernandina Island home, is the first of her species identified in more than a century. Princeton geneticist Stephen Gaughran successfully extracted DNA from a specimen collected from the same island more than a century ago and confirmed that Fernanda and the museum specimen are members of the same species and genetically distinct from all other Galápagos tortoises. (Credit: Courtesy of the Galápagos Conservancy)