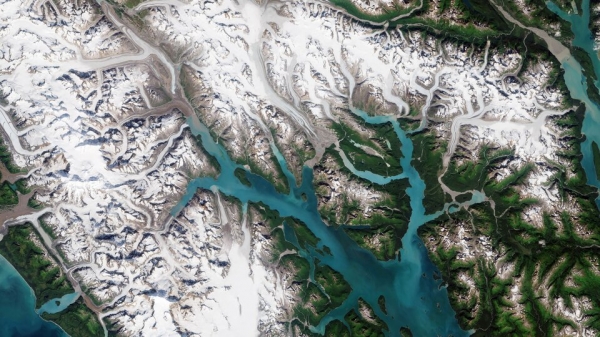 Glacier Bay is just one of the many areas suffering from the effects of global warming.

Covering over 13 000 sq km of rugged, snow-capped mountains, freshwater lakes, glaciers and deep fjords, Glacier Bay National Park and Preserve is one of the highlights of Alaska’s Inside Passage. As marine waters make up almost one-fifth of the park, Glacier Bay is rich with marine life, including humpback whales, orcas and sea otters. It’s also home to a large population of bears, moose, wolves and mountain goats.

The bay contains some of the world’s most impressive glaciers that descend from the ice-covered St. Elias Range in the east and the Fairweather Range in the west, with a few notable tidewater glaciers extending all the way to the sea.

John Hopkins Glacier, visible in the far left of the image, is the largest tidewater glacier in the region. Muir Glacier, formerly the most famous of the tidewater glaciers, once rose around 80 m above water and was nearly 3 km wide but has now shrunk and receded and no longer reaches the sea.

Glacier Bay is just one of the many areas suffering from the effects of global warming. The bay is expected to become warmer and drier over the next century, with widespread effects including the further shrinking glaciers, reduced sea ice and shoreline erosion.