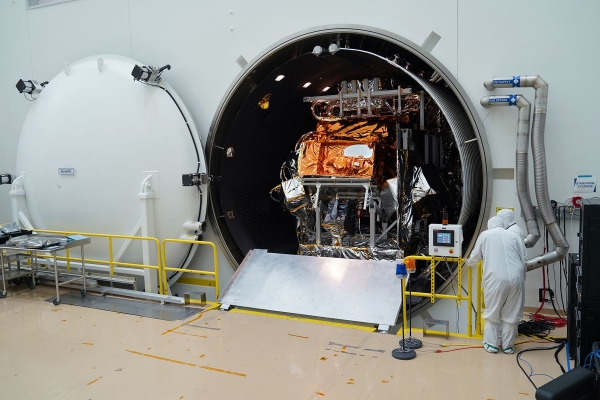 NOAA’s JPSS-2 satellite has cleared a critical testing milestone, bringing it a step closer to launch.

NOAA’s JPSS-2 satellite has cleared a critical testing milestone, bringing it a step closer to launch. Last week, the polar-orbiting satellite emerged from the chamber after completing its thermal vacuum testing. This test is meant to show that the spacecraft and all of its instruments will perform successfully when exposed to the harsh environments of space.

“I can absolutely say with 100% certainty that the observatory is working great,” said JPSS Flight Project Manager Andre Dress. “All the instruments are performing great, and we’re going to meet all our requirements – and then some.”

NOAA’s JPSS-2, the third satellite in the Joint Polar Satellite System series, will provide data that inform weather forecasts, extreme weather and climate change. It is slated to launch Nov. 1, 2022, from the Vandenberg Space Force Base in California and will be renamed NOAA-21 after reaching orbit.

The thermal vacuum test simulates the vacuum of space and the harsh temperature extremes the satellite will experience while in Earth’s orbit.