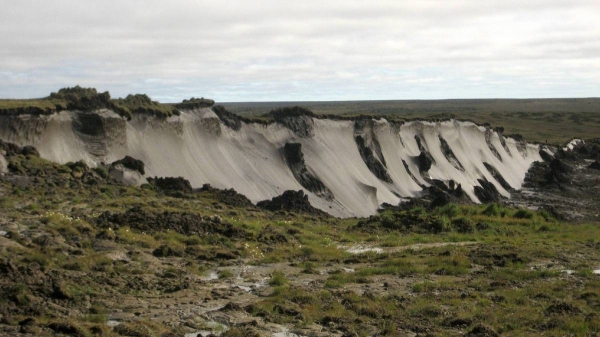 A new publication and interactive map summarise the current state of knowledge on the risks posed by permafrost soils – and call for decisive action.

A new publication and interactive map summarise the current state of knowledge on the risks posed by permafrost soils – and call for decisive action.

How is climate change affecting the permanently frozen soils of the Arctic? What will the consequences be for the global climate, human beings, and ecosystems? And what can be done to stop it? In the journal Frontiers in Environmental Science, a team of experts led by Benjamin Abbott from Brigham Young University, USA and Jens Strauss from the Alfred Wegener Institute in Potsdam summarise the current state of knowledge on these questions. In addition, an AWI group led by Moritz Langer has now created an interactive map of the past and future of permafrost. Both publications arrive at the same conclusion: to put a stop to the dangerous trends in these regions, greenhouse-gas emissions will have to be dramatically reduced in the next several years.

Permafrost underlies no less than ten percent of the Earth’s surface. Especially in the Northern Hemisphere, there are huge expanses in which only the top few centimetres of the soil thaw in summer; the remainder stays frozen year-round, to depths of several hundred metres. At least, that’s the case so far. “Climate change represents a serious threat to these permafrost regions,” says Jens Strauss from the Alfred Wegener Institute, Helmholtz Centre for Polar and Marine Research (AWI). There, land surface temperatures have climbed two to four times as quickly as the global average. As a result, the conditions on land and in the sea are changing far faster than expected. And this can have a range of dangerous consequences – for the climate, for biodiversity and for human beings.