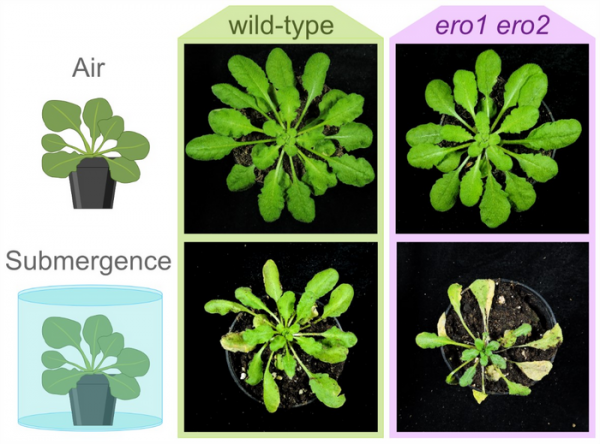 Proteins often consist of hundreds or thousands of individual parts, the amino acids.

Proteins often consist of hundreds or thousands of individual parts, the amino acids. These are connected like the links of a chain. However, protein molecules would not be able to fulfill their task as a long filament flapping back and forth. Each of them is therefore folded in its own, very specific way during its creation. For proteins that are released from the cell to the outside or transported to intracellular stores, this folding takes place at a specific location in the cell: the endoplasmic reticulum (ER). Here, the partial strands that end up lying next to each other in the course of this protein folding can also be linked together at defined points. This prevents the ball from unraveling and retains its functional shape.

The connection is made via a mechanism that many people are already familiar with in a completely different context - in the hair salon. That is because it is used in perming to keep the hair in shape. For this purpose, certain chemicals are applied to the curlers. They ensure that chemical bonds, known as disulfide bridges, are formed between neighboring hair proteins. "Disulfide bridges, which link the neighboring sub-strands, are also formed at certain points in the protein filament during protein folding," explains Prof. Dr. Andreas Meyer of the Institute of Crop Science and Resource Conservation (INRES) at the University of Bonn.

Chemically, this process is an oxidation: This is because certain amino acids contain bound hydrogen sulfide (chem: S-H). If two such amino acids come to lie next to each other during the folding of the filament and one splits off the hydrogen (H) from their S-H groups, a disulfide bridge (chem: S-S) forms. For this process, one electron is removed from each of the two original S-H bonds. This is done by certain proteins that exert a precisely matching "traction force" on the electrons. However, the removed electrons must be guided out of this environment, otherwise they can cause damage.