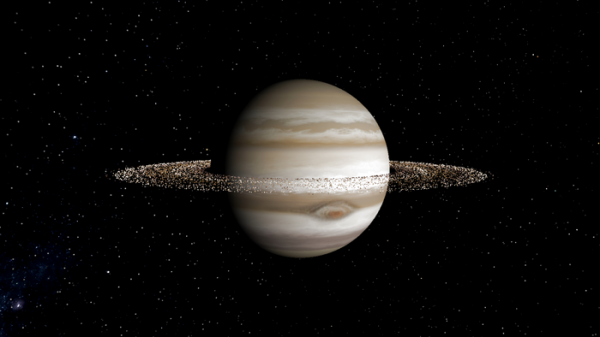 Because it’s bigger, Jupiter ought to have larger, more spectacular rings than Saturn has.

Because it’s bigger, Jupiter ought to have larger, more spectacular rings than Saturn has. But new UC Riverside research shows Jupiter’s massive moons prevent that vision from lighting up the night sky.

“It’s long bothered me why Jupiter doesn’t have even more amazing rings that would put Saturn’s to shame,” said UCR astrophysicist Stephen Kane, who led the research.

“If Jupiter did have them, they’d appear even brighter to us, because the planet is so much closer than Saturn.” Kane also had questions about whether Jupiter once had fantastic rings and lost them. It is possible for ring structures to be temporary.

To understand the reason Jupiter currently looks the way it does, Kane and his graduate student Zhexing Li ran a dynamic computer simulation accounting for the orbits of Jupiter’s four main moons, as well as the orbit of the planet itself, and information about the time it takes for rings to form. Their results are detailed here, soon to be published in the Planetary Science journal.

Image: UCR astrophysicist Stephen Kane created a simulation of what Jupiter would look like with giant rings like Saturn's. (Credit: UCR/Stephen Kane)