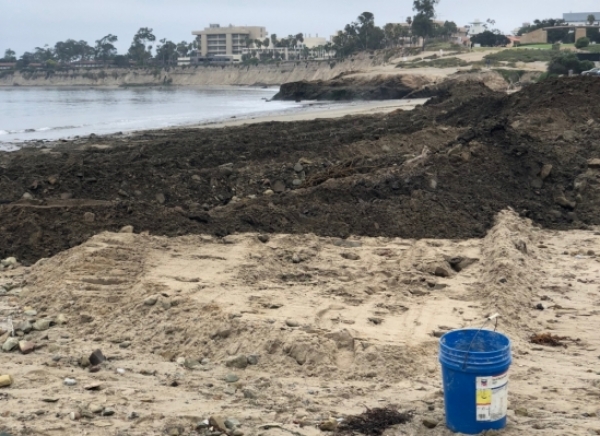 The catastrophic debris flow that affected Montecito, Calif., in early January, 2018 was the result of a rare confluence of severe events. The Thomas Fire had been raging for weeks in Ventura and Santa Barbara counties, and an unusually strong winter storm dumped half an inch of rain in five minutes on the newly-charred hills above the suburban enclave. With the tough vegetation that holds the hillsides in place burned off by the fire, tons of water, silt, burnt plant matter and rocks roared down the slopes and engulfed the community below, causing massive damage and the death of 23 residents.

As the community dug itself out of the mud in the aftermath of the disaster, Santa Barbara County’s flood control officials were faced with a major problem: what to do with the slurry of silt and other debris that had flooded creeks, clogged catchments and buried homes. One solution: Take it to Goleta Beach for disposal, which they did later that month over the course of several weeks.

“They were trying to work alongside Mother Nature to get the debris material dispersed,” recalled Heili Lowman, at the time a graduate student researcher affiliated with the Santa Barbara Coastal Long Term Ecological Research program, under the guidance of UC Santa Barbara ecologist John Melack. Wintertime into spring is the period of the most precipitation in the area, she explained, with waves and storms battering the coast and rains filling creeks that run into the sea, which could enhance dispersal of the material offshore.