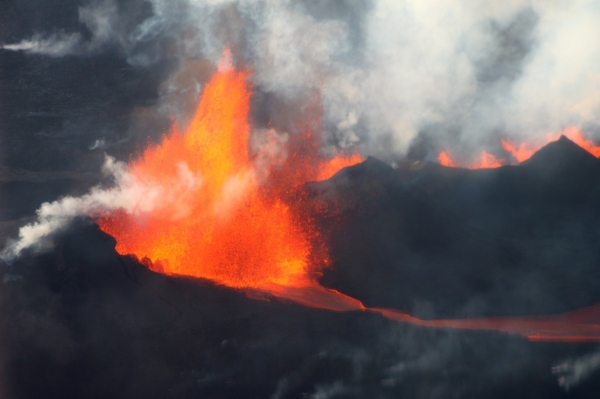 Aerosol particles in the atmosphere have a bigger impact on cloud cover – but less effect on cloud brightness – than previously thought, new research shows.

Aerosols are tiny particles suspended in the atmosphere, and they play a key role in the formation of clouds. With aerosols increasing due to human activities, numerous assessments by the Intergovernmental Panel on Climate Change (IPCC) have suggested they could have an important impact on climate change because clouds reflect sunlight and therefore keep temperatures cooler. However, this cooling impact of aerosols on clouds is difficult to measure, and this has led to significant uncertainty climate change projections.

The new study – led by the University of Exeter, with national and international academic partners and the UK’s Met Office – used the 2014 Icelandic volcano eruption to investigate this.

"This massive aerosol plume in an otherwise near-pristine environment provided an ideal natural experiment to quantify cloud responses to aerosol changes, namely the aerosol’s fingerprint on clouds" said lead author Dr Ying Chen. "Our analysis shows that aerosols from the eruption increased cloud cover by approximately 10%. Based on these findings, we can see that more than 60% of the climate cooling effect of cloud-aerosol interactions is caused by increased cloud cover. Volcanic aerosols also brightened clouds by reducing water droplet size, but this had a significantly smaller impact than cloud-cover changes in reflecting solar radiation."