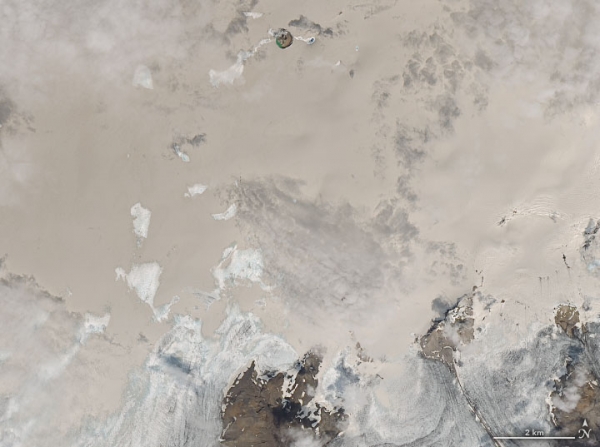 Windstorms lofted sand and dust from the ground onto the Vatnajökull ice cap.

The Vatnajökull ice cap blankets about 8 percent of Iceland in a vast expanse of white. But in July 2022, that white cap was suddenly stained with gray and brown. How the color got there is not quite what you would expect on a damp, icy island.

The change is visible in the image pair above, acquired by the Moderate Resolution Imaging Spectroradiometer (MODIS) on NASA’s Terra satellite. On July 2, 2022 (left), the ice cap appeared generally white. Eleven days later, the surfaces of Tungnaárjökull and nearby glaciers had darkened.

Without new snowfall, the color persisted throughout the month. The Operational Land Imager (OLI) on Landsat 8 acquired a detailed view (below) on July 24.