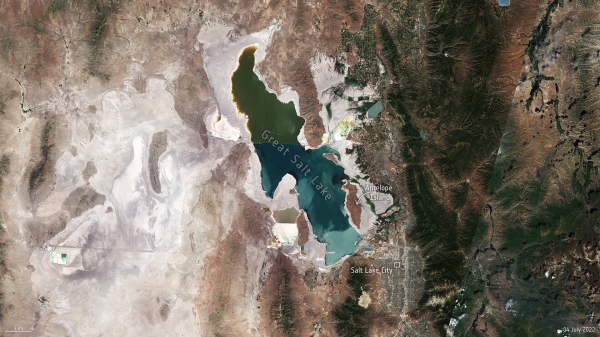 According to data from the US Geological Survey, the Great Salt Lake’s surface water elevation fell to the lowest level since records began in the mid-1800s, to an average of 1277 m above sea level. As a result of this drop in water level, the lake has lost nearly half of its surface area from the historical average, exposing around 2000 sq km of lakebed – an area the same size as Tenerife.

The lake now contains little more than one-fourth of the volume of water now as it did at its high point in 1987, according to the US Geological Survey. Water usage and the climate change-fuelled drought are two of the main reasons behind the lake’s decline.

The lake goes through seasonal cycles of water loss and replenishment after rain and snow melt fills it back up. According to officials, the water evaporation and depletion exceed the amount of water entering the lake. The lake’s water levels are expected to further decrease until autumn or early winter, when incoming water equals or exceeds the evaporative losses.