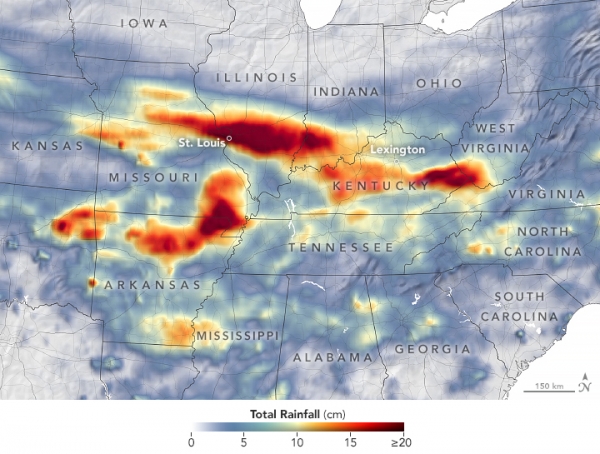 Record-breaking rainfall brought devastating flash floods and landslides to Missouri, Kentucky, and other parts of the central United States in the last week of July 2022.

Record-breaking rainfall brought devastating flash floods and landslides to Missouri, Kentucky, and other parts of the central United States in the last week of July 2022. As noted previously by the Intergovernmental Panel on Climate Change and the American Meteorological Society, extreme precipitation events and weather are becoming more likely with climate change.

The map above depicts a satellite-based estimate of rainfall from July 25-31, 2022. The darkest reds reflect the highest rainfall amounts, with broad swaths of Missouri, Arkansas, Illinois, Indiana, and Kentucky receiving more than 20 centimeters (8 inches) of rain. The data are remotely sensed estimates that come from the Integrated Multi-Satellite Retrievals for GPM (IMERG), a product of the Global Precipitation Measurement (GPM) satellite mission. Due to the averaging of the satellite data, local rainfall amounts may be significantly higher when measured from the ground.

The deluge started on July 25-26 around St. Louis, Missouri, where a series of “training thunderstorms” rolled through the region one after the other. The National Weather Service (NWS) noted that rainfall rates occasionally reached two inches per hour, and nearly 8 inches fell in eight hours across a long swath from Montgomery County, Missouri, to St. Clair County, Illinois. Lambert International Airport (St. Louis) set a new record with 8.64 inches (21.95 cm) of rain in 24 hours; the previous record was set in 1915 by the remnants of a hurricane.