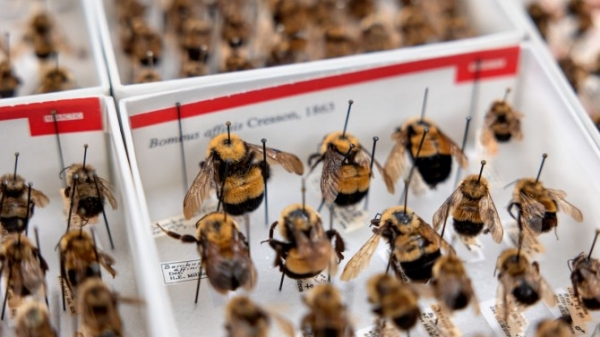 A New York state survey, supported by Cornell bee experts, finds that more than half of important native pollinators may be at risk of disappearing from the state – potentially threatening crops, wildflowers and insect diversity.

The three-year Empire State Native Pollinator Survey, released Aug. 4 by the state Department of Environmental Conservation (DEC), found that at least 38% – and as many as 60% – of the pollinators targeted by the survey are at risk because they are rare or declining. For bees, up to 24% of the species may be at risk and an additional 11% are considered possibly extirpated, or known only from historical records. The survey is among the most systematic conservation status assessments of pollinators conducted by any state, according to its authors.

The survey establishes a baseline for future monitoring of wild bees, wasps, flies, beetles and moths that are key pollinators of crops, wildflowers and host plants, and offers recommendations aimed at preserving biodiversity – from habitat conservation to reduced pesticide use.