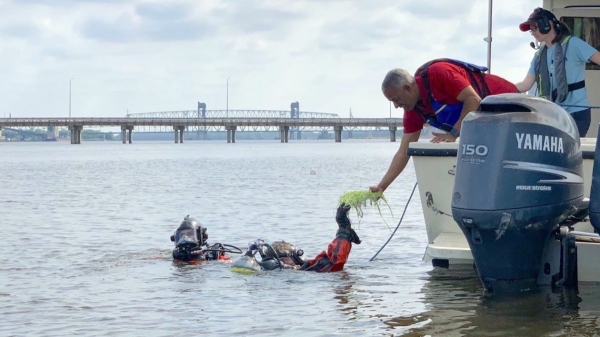 On a recent summer morning near Camden, New Jersey, two divers from the U.S. Environmental Protection Agency hovered over a patch of sediment 10 feet below the surface of the Delaware River.

On a recent summer morning near Camden, New Jersey, two divers from the U.S. Environmental Protection Agency hovered over a patch of sediment 10 feet below the surface of the Delaware River. With less than two feet of visibility in the churning estuary, they were transplanting a species crucial to the ecosystem: Vallisneria americana, or wild celery grass. One diver held a GoPro camera and a flashlight, capturing a shaky clip of the thin, ribbon-like blades bending with the current.

Watching the divers’ bubbles surface from the EPA’s boat was Anthony Lara, experiential programs supervisor at the Center for Aquatic Sciences at Adventure Aquarium in Camden, who had nurtured these plants for months in tanks, from winter buds to mature grasses some 24 inches long.

“It’s a little nerve-wracking,” he said of releasing the grasses into the wild, where they could get nudged out by a competing plant or eaten by a duck. “But that’s life.”

This was the first planting of a new restoration project led by Upstream Alliance, a nonprofit focused on public access, clean water, and coastal resilience in the Delaware, Hudson, and Chesapeake watersheds. In collaboration with the Center for Aquatic Sciences, and with support from the EPA’s Mid-Atlantic team and the National Fish and Wildlife Foundation, the alliance is working to repopulate areas of the estuary with wild celery grass, a plant vital to freshwater ecosystems. It’s among the new, natural restoration projects focused on bolstering plants and wildlife to improve water quality in the Delaware River, which provides drinking water for some 15 million people.