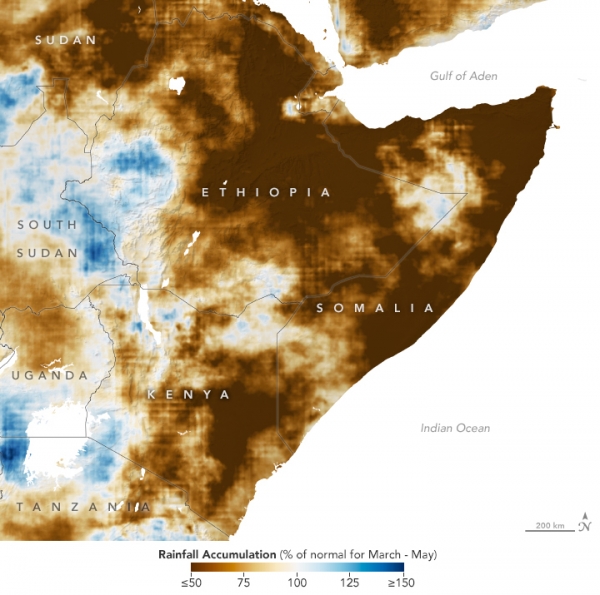 The Horn of Africa is facing drought and crop failures after four inadequate rainy seasons.

The rains have failed in Eastern Africa for four consecutive seasons. That has not happened in 40 years of satellite records. Scientists and aid agencies are now alerting the world to an unprecedented level of food insecurity in 2022 for Ethiopia, Kenya, and Somalia. With forecasts suggesting the next rainy season will also be inadequate, climate and agriculture experts are advising governments and relief agencies to expect a significant need for food assistance.

According to a July 29 report from the international Food Security and Nutrition Working Group, the worst drought in 70 years has left more than 16 million people across the Horn of Africa coping with a shortage of drinking water. Yields of key crops are down for the third year in a row, milk production is in decline, and more than 9 million livestock animals have died or been culled due to a lack of water and suitable forage land. At the same time, regional conflicts, COVID-19, locusts, and the Ukraine War have caused price spikes and shortages of basic commodities. An estimated 18–21 million people now “face high levels of acute food insecurity” in Ethiopia, Kenya, and Somalia, the working group noted.

Tropical countries within the Horn of Africa tend to have two rainy seasons: the October, November, and December (OND) “short rains” and the March, April, and May (MAM) “long rains” (which sometimes extend to August in some areas). The 2020 and 2021 OND rainfall was substantially below normal, and the 2021 MAM season was also drier than normal. Then the 2022 MAM season brought the lowest rainfall on record for much of the region. At the same time, the region has endured extremely warm air temperatures that desiccate soils and evaporate already diminished water supplies.