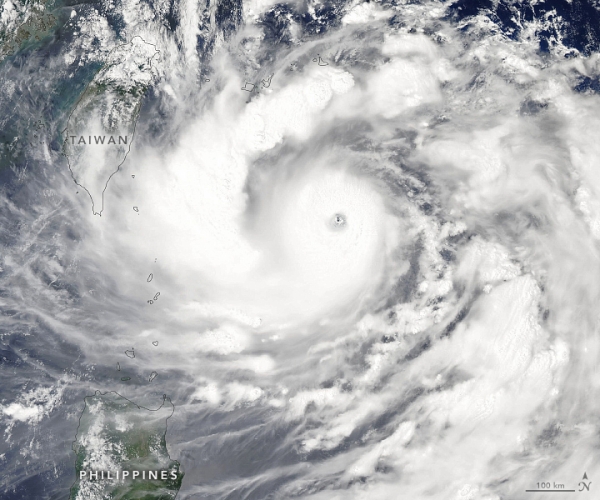 For most of 2022, the world’s ocean basins have been relatively quiet and free of tropical cyclones.

For most of 2022, the world’s ocean basins have been relatively quiet and free of tropical cyclones. This week, Typhoon Hinnamnor shattered the calm, spinning up quickly to category-5 strength in the Western Pacific Ocean. The path of the storm has been erratic and the potential for landfall is currently unclear.

On September 1, 2022, the Moderate Resolution Imaging Spectroradiometer (MODIS) on NASA’s Aqua satellite acquired this natural-color image of Hinnamnor. Though the typhoon appeared to be bearing down on Taiwan in the image, it had actually started to turn north and away from the island. A few hours after the image was acquired, the U.S. Joint Typhoon Warning Center reported sustained winds of 115 knots (140 miles/220 kilometers per hour), with gusts up to 140 knots. The storm was approximately 610 kilometers (330 nautical miles) south of Okinawa.

On August 30, Hinnamnor became the first category-5 storm on Earth in 2022, as winds reached 260 kilometers (160 miles) per hour. As noted by Yale Climate Connections, it was pretty late in the year for the first storm of such intensity; an average of 5.3 category-5 storms form each year globally.