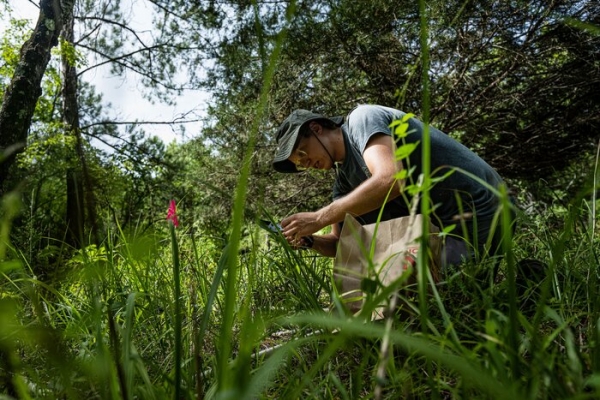 As anyone who’s crossed Texas on Interstate 10 can tell you, the Lone Star State is where east meets west.

As anyone who’s crossed Texas on Interstate 10 can tell you, the Lone Star State is where east meets west. For Rice University biologist Tom Miller, the sharp divide between East Texas’ humid piney woods and West Texas’ parched desert is also a living laboratory where he and his students can learn about boundaries that aren’t found on maps.

“That's one of the sharpest aridity gradients on the planet,” Miller said of the climatic shift from east to west Texas. “And it’s an important boundary for species. A lot of species that occur in eastern North America hit their westernmost limits in Texas.”

Miller, an associate professor of biosciences at Rice, and his research group study range limits, invisible biological dividing lines between where a species can survive and where it can’t. In a world of changing climate, those lines are moving, and Miller and his students want to study and understand how they are moving and why.

Miller’s team studies grasses and other species at eight field sites along a 580-mile stretch of I-10 from lush Lafayette, Louisiana, to sandy Sonora, Texas, about 170 miles west of San Antonio. Thanks to a grant from the National Science Foundation, they’ve begun a first-of-its-kind study to find out whether a strange, ancient marriage between native Texas grasses and their hidden fungal partners could position the plants to better withstand droughts that are expected to be more frequent and severe due to climate change.