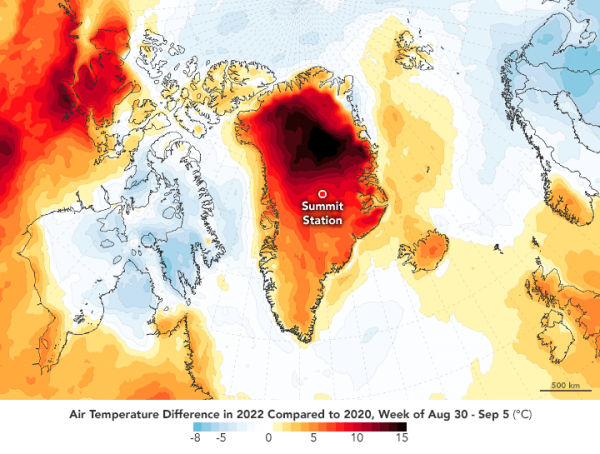 In September 2022, vast areas atop the Greenland ice sheet melted.

In September 2022, vast areas atop the Greenland ice sheet melted. Some scientists think the widespread late-season melting—the most on record for any September—could have implications for the ice sheet next year.

Greenland’s melting season typically runs from May to early September. The 2022 season started slowly, as lower-than-average air temperatures in May and June culminated in the least amount of spring melting in a decade. Melting continued at a modest pace throughout the summer, with a surge in mid-July. At its peak on July 18, surface melting spanned 688,000 square kilometers (266,000 square miles) of the ice sheet.

A late-season warm spell brought a substantial melting event from September 1–6. At its peak on September 3, melting occurred across 592,000 square kilometers of the ice sheet—the second-largest melting spike of the 2022 season and the largest for any September since the start of record-keeping in 1979. Melt events of this magnitude are unlikely in September because seasonal temperatures usually drop as the hours of sunlight decrease.