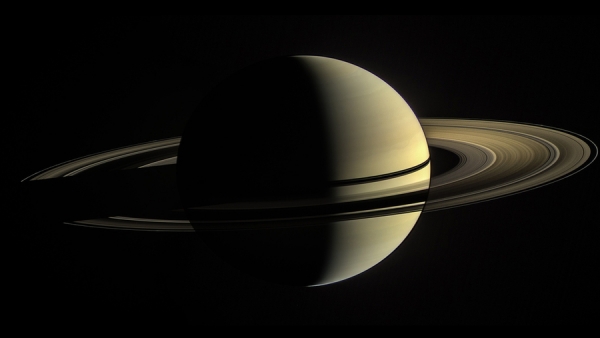 A “grazing encounter” may have smashed the moon to bits to form Saturn’s rings, a new study suggests.

A “grazing encounter” may have smashed the moon to bits to form Saturn’s rings, a new study suggests.

Swirling around the planet’s equator, the rings of Saturn are a dead giveaway that the planet is spinning at a tilt. The belted giant rotates at a 26.7-degree angle relative to the plane in which it orbits the sun. Astronomers have long suspected that this tilt comes from gravitational interactions with its neighbor Neptune, as Saturn’s tilt precesses, like a spinning top, at nearly the same rate as the orbit of Neptune.

But a new modeling study by astronomers at MIT and elsewhere has found that, while the two planets may have once been in sync, Saturn has since escaped Neptune’s pull. What was responsible for this planetary realignment? The team has one meticulously tested hypothesis: a missing moon.

In a study appearing today in Science, the team proposes that Saturn, which today hosts 83 moons, once harbored at least one more, an extra satellite that they name Chrysalis. Together with its siblings, the researchers suggest, Chrysalis orbited Saturn for several billion years, pulling and tugging on the planet in a way that kept its tilt, or “obliquity,” in resonance with Neptune.

Image: Scientists propose a lost moon of Saturn, which they call Chrysalis, pulled on the planet until it ripped apart, forming rings and contributing to Saturn’s tilt. (Credits:Image: NASA/JPL-Caltech/Space Science Institute)