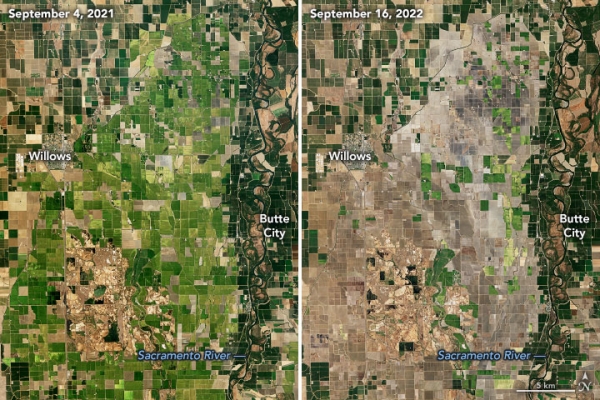 The ongoing drought has cut rice acreage in the Sacramento Valley in half.

The Sacramento Valley is normally the largest rice-growing region in California, producing hundreds of millions of dollars worth of rice each year. However, 2022 has been anything but normal. Drought and water shortages have meant rice growers have only planted half as much of the grain as usual.

The scale of the change is visible from space. The right side of the image pair above shows a major rice-producing area east of Willows on September 16, 2022; the left side shows the same area on September 4, 2021. Tens of thousands of acres of farmland that would normally be green as farmers prepare for harvest were instead brown and idle in 2022. Both natural-color satellite images were acquired by the Operational Land Imager (OLI) on Landsat 8.

The changes were most pronounced in Colusa and Glenn counties (the western part of the valley), where rice acreage dropped by 84 and 75 percent in 2022 compared to 2021, according to UC Davis agricultural economist Aaron Smith. Farther to the east, in Butte County, rice acreage was down by 17 percent. Farmers in that county had more groundwater to tap and so were less affected by reduced water allocations from the Central Valley Water Project.