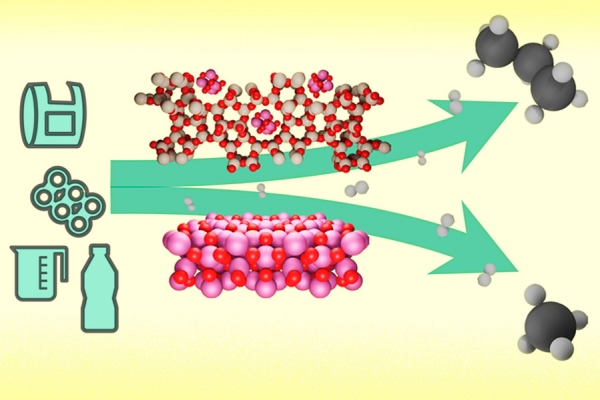 Cobalt-based catalysts could be used to turn mixed plastic waste into fuel, new plastics, and other products.

Cobalt-based catalysts could be used to turn mixed plastic waste into fuel, new plastics, and other products.

The accumulation of plastic waste in the oceans, soil, and even in our bodies is one of the major pollution issues of modern times, with over 5 billion tons disposed of so far. Despite major efforts to recycle plastic products, actually making use of that motley mix of materials has remained a challenging issue.

A key problem is that plastics come in so many different varieties, and chemical processes for breaking them down into a form that can be reused in some way tend to be very specific to each type of plastic. Sorting the hodgepodge of waste material, from soda bottles to detergent jugs to plastic toys, is impractical at large scale. Today, much of the plastic material gathered through recycling programs ends up in landfills anyway. Surely there’s a better way.

According to new research from MIT and elsewhere, it appears there may indeed be a much better way. A chemical process using a catalyst based on cobalt has been found to be very effective at breaking down a variety of plastics, such as polyethylene (PET) and polypropylene (PP), the two most widely produced forms of plastic, into a single product, propane. Propane can then be used as a fuel for stoves, heaters, and vehicles, or as a feedstock for the production of a wide variety of products — including new plastics, thus potentially providing at least a partial closed-loop recycling system.

Image: Caption:A new chemical process can break down a variety of plastics into usable propane — a possible solution to our inability to effectively recycle many types of plastic. (Credits:Image: Courtesy of the researchers. Edited by MIT News)