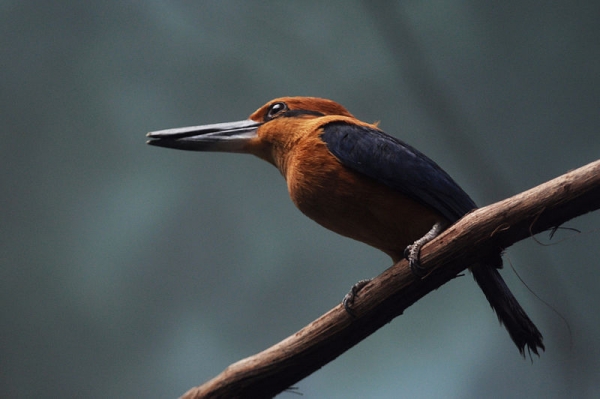 The Guam rail, also known as the ko’ko’, has all the architectural grace of a wood-paneled Buick station wagon.

The Guam rail, also known as the ko’ko’, has all the architectural grace of a wood-paneled Buick station wagon. Mostly brown, with white longitudinal stripes on its head and a houndstooth pattern around its midsection, it has a crow-sized chassis, tiny wings, and long, chickenish legs. It is narrow in profile, designed for a life of scurrying through the underbrush. The rail cannot fly, and it nests on the ground.

This way of life suited the rail fine until humans released brown tree snakes onto its native island of Guam. In the early 1970s, the bird began a “drastic numerical and distributional decline,” according to the U.S. Fish and Wildlife Service, and by 1983, fewer than 100 individual birds remained.

In the mid-1980s, Fish and Wildlife and a consortium of zoos gathered up what birds they could find and began breeding them. Guam rails, it soon became clear, are willing captive breeders. In 1989, the agency proposed releasing some of the birds back into the wild — not on Guam but on the island of Rota, some 40 miles away, which had not, to anyone’s knowledge, ever had Guam rails.

The planet’s wildlife is in precipitous decline. The World Wide Fund for Nature and the Zoological Society of London published a study this month estimating that the populations of some 5,200 vertebrate species have declined by an average of roughly 70 percent since 1970. A 2019 report from the United Nations warned that human activity threatened as many as a million species with extinction. The leading cause of this decline is habitat loss. Humans have displaced countless species, directly or indirectly modifying much of the Earth’s surface — more than 70 percent of its land, according to another recent United Nations estimate.