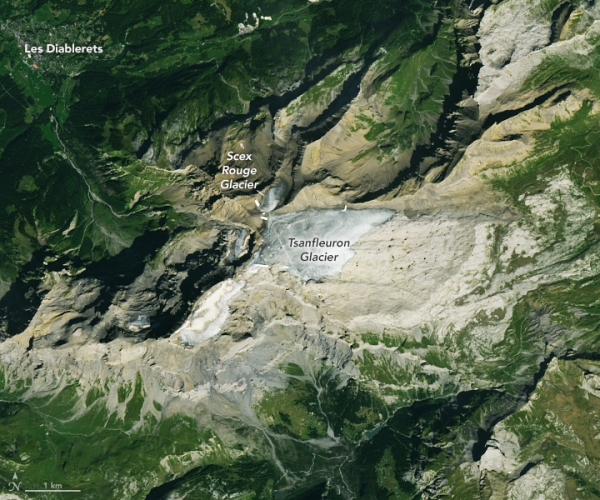 Continuing their long decline, glaciers in the Swiss Alps melted more in 2022 than any other year on record.

In 2022, glaciers in the Swiss Alps melted more than any other year on record. It was the latest downturn for the country’s glaciers, which have lost more than half of their volume of ice since the 1930s.

This pair of natural-color images shows the changes to a glaciated area in western Switzerland in just over two decades. The right image was acquired on August 25, 2022, with the Operational Land Imager-2 (OLI-2) on Landsat 9. For comparison, the left image shows the same area on August 15, 2001, acquired with the Enhanced Thematic Mapper Plus (ETM+) on Landsat 7.

The images feature the Tsanfleuron and Scex Rouge glaciers, located in the Diablerets mountain group. The glaciers rest on different sides of a mountain slope, but they have long been connected at Tsanfleuron pass. According to Matthias Huss, director of the Swiss Glacier Monitoring Network (GLAMOS), melting during summer 2022 exposed a rocky path between the two glaciers at Tsanfleuron pass for the first time in several thousand years.