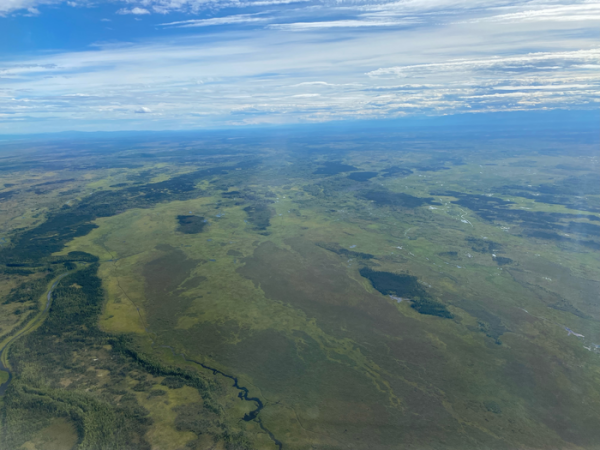 From the window of a NASA Gulfstream III research aircraft, Alaska looks like a pristine wilderness untouched by humans.

From the window of a NASA Gulfstream III research aircraft, Alaska looks like a pristine wilderness untouched by humans. The land is covered in lush, green vegetation and dotted with bright blue lakes. Snow-capped mountains reach toward the sky, and chocolate milk-colored rivers snake across the landscape. The obvious signs of human activity – cities, roads, infrastructure – are hard to spot.

But on closer inspection, some hints of human-induced change appear to the eye. Sunken pockets of land. Abnormally tilted trees. Ponds where there used to be dry ground. Through the eyes of scientists collecting data from the ground and the air, the signal is clear: The Arctic is being affected by climate change more than most places on Earth. Since 2015, scientists participating in NASA’s Arctic Boreal Vulnerability Experiment (ABoVE) have been studying the impacts of climate change on Earth’s far northern regions and how those changes are intertwined.

“ABoVE is a large-scale study of environmental change, not just climate change,” said Peter Griffith, a carbon cycle researcher at NASA’s Goddard Space Flight Center in Greenbelt, Maryland, and one of the leaders of ABoVE. “And we’re doing this as only NASA can: by studying this region from leaf to orbit.”

Aerial view of Alaska out the window of a NASA Gulfstream III plane. The land is mostly lush and green, with lakes dotting it and rivers snaking through the landscape. The sky is blue and has puffy white clouds. (Photo Credit: NASA / Sofie Bates)