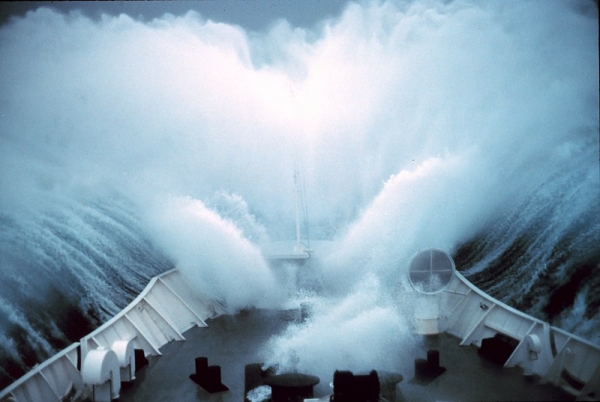 The eastern Mediterranean Sea, a large basin surrounded by ancient cultural sites, is also a climatology hot spot. However, the region has received comparatively little attention when it comes to understanding the extreme sea states that produce massive and potentially catastrophic waves.

Recognizing a gap in scientific knowledge, an international team of researchers led by Francesco Fedele, associate professor in the School of Civil and Environmental Engineering at Georgia Tech, investigated potential hazards for ship navigation in the eastern Mediterranean. They looked at rogue waves, examined how they form, and analyzed the likelihood that a ship would encounter them while navigating the rough waters of intense storms. Their findings illuminate the nature of extreme waves in the Mediterranean Sea and could advance technology for rogue wave predictions and maritime navigation in extreme weather conditions.

“Imagine that at a single point in the ocean, waves are coming from many directions,” Fedele said. “There is always a chance they will meet, pile up in amplitude, and create an enormous wave. This is what we call a rogue event.”

Rogue waves have long been observed in the western Mediterranean by eyewitnesses — sometimes travelers on cruise ships — and have been known to cause structural damage and loss of lives. To examine the case of the eastern Mediterranean, Fedele teamed up with collaborators at the Technion-Israel Institute of Technology and the CAMERI Coastal and Marine Engineering Research Institute in Haifa, Israel. The team employed a novel theory of space-time wave extremes and considered the hypothetical scenarios of Israeli naval fleet ships navigating the waters of two major storms that occurred in the Mediterranean Sea in 2017 and 2018.