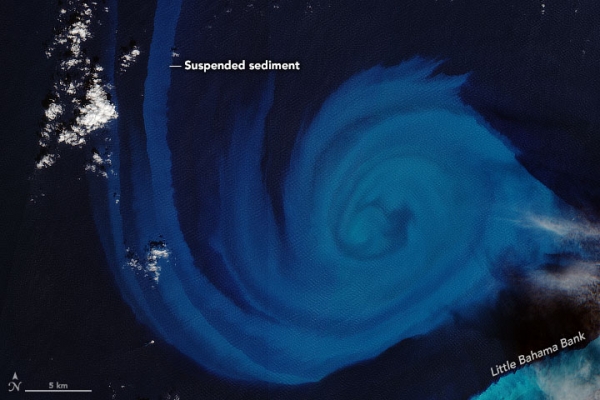 In November 2022, Tropical Storm Nicole barreled into the Bahamas and then hit central-east Florida as a hurricane.

In November 2022, Tropical Storm Nicole barreled into the Bahamas and then hit central-east Florida as a hurricane. The storm brought flooding and hundreds of millions of dollars of damage to the region. But offshore, it stirred up something unusual and beautiful: a series of eddies along the Abaco Islands in the northern Bahamas.

The group of satellite images above show several small eddies swirling out from shallow waters along the Little Bahama Bank’s carbonate platform. Similar swirls in the world’s oceans are sometimes colored by large concentrations of certain types of phytoplankton—microscopic plant-like organisms that in abundance can discolor water and be seen from space. But Chuanmin Hu, an oceanographer at the University of South Florida, thinks the color of these swirls has another explanation.

“I don’t think the swirls are phytoplankton because phytoplankton do not generally have such bright colors,” Hu said. “These are more likely carbonate-rich silt particles that were resuspended by Nicole, then washed offshore, and then caught up in surface currents.”