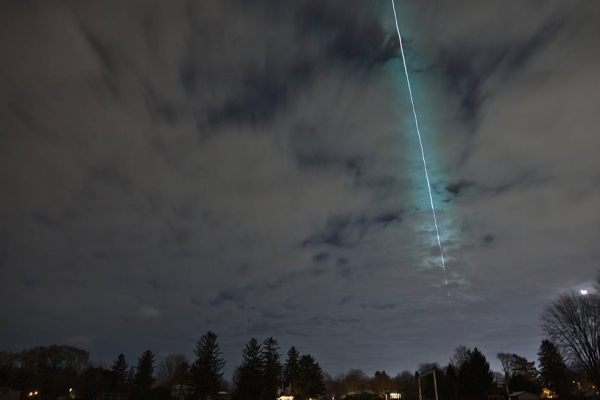 2022 WJ1 was a tiny asteroid on a collision course with Earth. But astronomers saw it coming, and NASA’s Scout impact hazard assessment system calculated where it would hit.

2022 WJ1 was a tiny asteroid on a collision course with Earth. But astronomers saw it coming, and NASA’s Scout impact hazard assessment system calculated where it would hit.

In the early hours of Saturday, Nov. 19, the skies over southern Ontario, Canada, lit up as a tiny asteroid harmlessly streaked across the sky high in Earth’s atmosphere, broke up, and likely scattered small meteorites over the southern coastline of Lake Ontario. The fireball wasn’t a surprise. Roughly 1 meter (3 feet) wide, the asteroid was detected 3 ½ hours before impact, making this event the sixth time in history a small asteroid has been tracked in space before impacting Earth’s atmosphere.

NASA is tasked with the detection and tracking of much larger near-Earth objects that could survive passage through Earth’s atmosphere and cause damage on the ground, but those objects can also be detected much further in advance than small ones like the asteroid that disintegrated over southern Ontario. Such small asteroids are not a hazard to Earth, but they can be a useful test for NASA’s planetary defense capabilities for discovery, tracking, orbit determination, and impact prediction.

“The planetary defense community really demonstrated their skill and readiness with their response to this short-warning event,” said Kelly Fast, Near-Earth Object Observations program manager for the Planetary Defense Coordination Office (PDCO) at NASA Headquarters in Washington. “Such harmless impacts become spontaneous real-world exercises and give us confidence that NASA’s planetary defense systems are capable of informing the response to the potential for a serious impact by a larger object.”

Image: This time-lapse photograph was taken by astronomer Robert Weryk from near his home in London, Ontario, Canada, after NASA’s Scout system forewarned him about the entry of 2022 WJ1 on Nov. 19, 2022. The resulting fireball streaked directly overhead and continued east until it broke up.
(Credits: Robert Weryk)