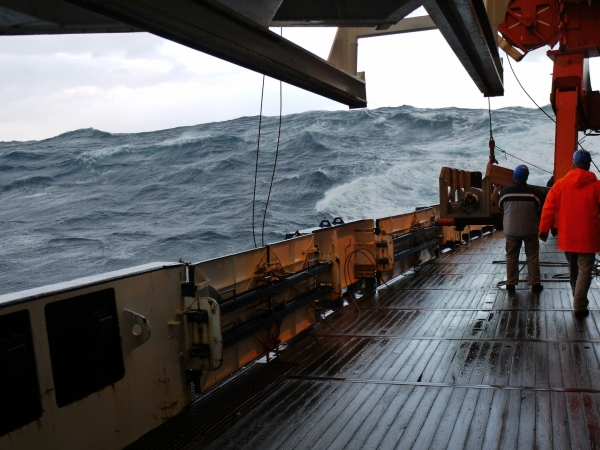 Dust from the high Andes of southern Bolivia and northern Argentina was an important source of iron for the nutrient-deficient South Pacific in the last two glacial cycles, especially at the beginnings of these cycles.

Dust from the high Andes of southern Bolivia and northern Argentina was an important source of iron for the nutrient-deficient South Pacific in the last two glacial cycles, especially at the beginnings of these cycles. This is the key finding of a new study in the journal Proceedings of the National Academy of Sciences.

Using a sediment core from the southern seafloor collected in 2009, the researchers were able to reconstruct the contributions from various dust sources located on the surrounding continents. According to the authors, the jet stream, a set of powerful air currents flowing from west to east several kilometers up, picked up fine mineral particles on the east side of the Andes and transported them almost all the way around Antarctica to the southeast Pacific.

Atmospheric dust is thought to be a key component of the climate system. Dust particles influence the Earth’s energy budget, because they reflect incoming sunlight at high altitudes, which has a cooling effect. Mineral particles can also carry nutrients such as iron and manganese to remote ocean areas, where they stimulate the growth of algae. When the algae die and sink to the deep ocean, they remove carbon dioxide from the atmosphere, which also has a cooling effect. These mechanisms can be particularly effective in the remote and iron-deficient southern reaches of the Pacific, Indian and Atlantic oceans, so changes in the Southern Hemisphere dust cycle may have played significant roles in past natural swings between cold glacial and warm interglacial periods. For this reason, the sources and transport pathways of dust have been the subject of intensive research in recent years.

Seafloor sediment from the South Pacific Ocean, seen here from the deck of the research vessel Polarstern, has opened a window onto how iron-rich dust blown from South America may have played a role in past glacial cycles. (Photo credit: Marcelo Arevalo)