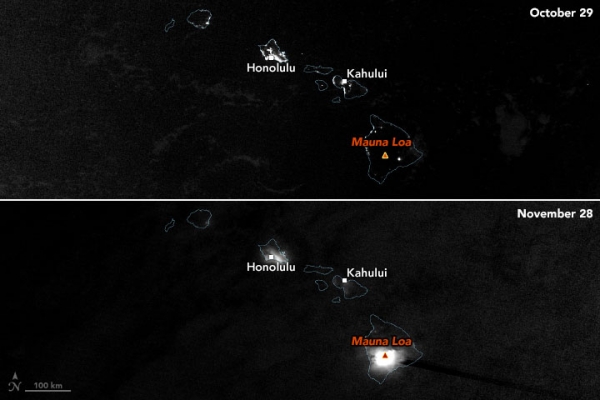 The world’s largest active volcano—Hawaii’s Mauna Loa—has been quiet for the past four decades. But in November 2022, the volcano began to stir.

The world’s largest active volcano—Hawaii’s Mauna Loa—has been quiet for the past four decades. But in November 2022, the volcano began to stir.

The first signs of unrest emerged in early October 2022, when U.S. Geological Survey data showed a tenfold increase in small earthquakes beneath the volcano’s summit caldera—a result of the underground movement of magma. Swarms of earthquakes continued sporadically through November 27, 2022, when new fissures began to spill lava across the caldera floor at 11:30 p.m. local time. Most of the lava fountains were only a few yards tall, though some of the tallest rose as high as 100–200 feet (30–60 meters). The lava flows in the caldera had quieted by the next day, although other fissures had opened slightly to the northeast by then.

The bright glow of the eruption was visible to NASA and NOAA satellites orbiting hundreds of miles above the surface. The image above was acquired at 2:25 a.m. local time (12:25 UTC) on November 28 by the “day-night band” of the Visible Infrared Imaging Radiometer Suite (VIIRS) on the NOAA-NASA Suomi NPP satellite. For comparison, the image above shows the same area on October 29, 2022, before the eruption had begun.