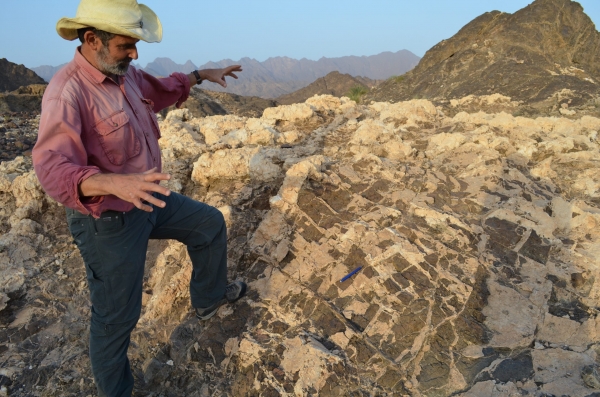 Geologist Peter Kelemen has been working in the desert of Oman for more than 15 years to study natural chemical reactions within rare deep-earth rocks that pull carbon from the air and lock it into solid mineral form.

Geologist Peter Kelemen has been working in the desert of Oman for more than 15 years to study natural chemical reactions within rare deep-earth rocks that pull carbon from the air and lock it into solid mineral form. His goal: harnessing and speeding up those reactions to remove carbon on an industrial scale. Based in large part on his research, Omani entrepreneurs recently formed 44.01, a company working to scale up and commercialize the processes. The company was just awarded a $1.2 million Earthshot Prize by Prince William, heir to the British throne, in a televised ceremony in Boston. Founded in 2021, the prize is aimed at funding five cutting-edge environmental ventures each year through 2030. We spoke with Kelemen about the science behind the project, its current state, and its prospects for the future.

The mountains of northern Oman and along the coast of the United Arab Emirates host a huge block of oceanic crust and upper mantle that was thrust onto the edge of the Arabian continent starting 96 million years ago. It is 350 kilometers long, up to 50 kilometers wide, and many kilometers thick. It is tilted, and exposes rocks that formed more than 20 kilometers below the sea floor. Surface exposures of the Earth’s mantle are quite rare, and this is the largest in the world. Spectacular canyons cut through it, so you can literally walk down into what used to be the Earth’s interior. Rocks like this react rapidly with CO2 in the atmosphere and surface water, and this forms solid carbonate minerals, for example limestone. The process is spontaneous. So we’ve been seeking to understand how it works, and then design methods that accelerate it in order to store significant amounts of CO2 on a human time scale. We are focusing on injecting CO2 dissolved in water underground. It might use a lot of water, and of
course water is very valuable in the Middle East, so we look for areas near the coast, where there is an essentially infinite supply.

Geologist Peter Kelemen surveys an outcrop of exposed mantle rock in Oman. The light material is a carbon-based mineral that has reacted with the rock to form a solid deposit. (Photo Credit: Kevin Krajick/Earth Institute)