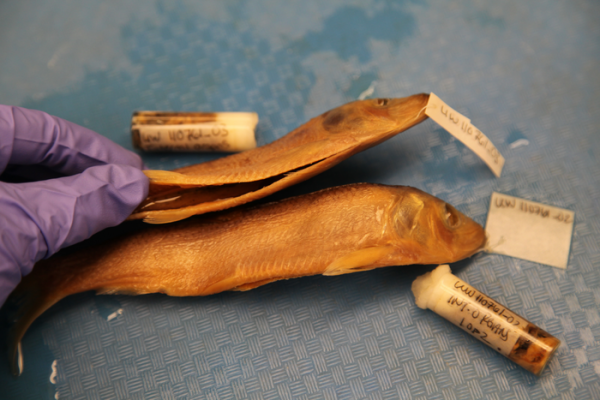 More than a century of preserved fish specimens offer a rare glimpse into long-term trends in parasite populations.

More than a century of preserved fish specimens offer a rare glimpse into long-term trends in parasite populations. New research from the University of Washington shows that fish parasites plummeted from 1880 to 2019, a 140-year stretch when Puget Sound — their habitat and the second largest estuary in the mainland U.S. — warmed significantly.

The study, published the week of Jan. 9 in the Proceedings of the National Academy of Sciences, is the world’s largest and longest dataset of wildlife parasite abundance. It suggests that parasites may be especially vulnerable to a changing climate.

“People generally think that climate change will cause parasites to thrive, that we will see an increase in parasite outbreaks as the world warms,” said lead author Chelsea Wood, a UW associate professor of aquatic and fishery sciences. “For some parasite species that may be true, but parasites depend on hosts, and that makes them particularly vulnerable in a changing world where the fate of hosts is being reshuffled.”

A researcher holds open a preserved fish specimen that has been inspected for parasites. The study included eight fish species and 699 fish specimens, which yielded more than 17,000 parasites. (Photo Credit:Katherine Maslenikov/UW Burke Museum)