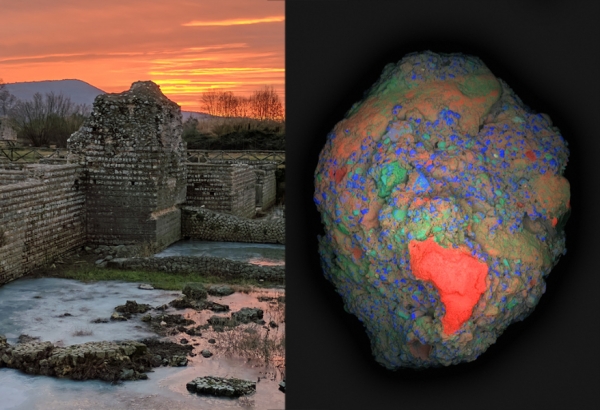 An unexpected ancient manufacturing strategy may hold the key to designing concrete that lasts for millennia.

An unexpected ancient manufacturing strategy may hold the key to designing concrete that lasts for millennia.

The ancient Romans were masters of engineering, constructing vast networks of roads, aqueducts, ports, and massive buildings, whose remains have survived for two millennia. Many of these structures were built with concrete: Rome’s famed Pantheon, which has the world’s largest unreinforced concrete dome and was dedicated in A.D. 128, is still intact, and some ancient Roman aqueducts still deliver water to Rome today. Meanwhile, many modern concrete structures have crumbled after a few decades.

Researchers have spent decades trying to figure out the secret of this ultradurable ancient construction material, particularly in structures that endured especially harsh conditions, such as docks, sewers, and seawalls, or those constructed in seismically active locations.

Now, a team of investigators from MIT, Harvard University, and laboratories in Italy and Switzerland, has made progress in this field, discovering ancient concrete-manufacturing strategies that incorporated several key self-healing functionalities. The findings are published today in the journal Science Advances, in a paper by MIT professor of civil and environmental engineering Admir Masic, former doctoral student Linda Seymour ’14, PhD ’21, and four others.

Image: Caption:A large-area elemental map (Calcium: red, Silicon: blue, Aluminum: green) of a 2 cm fragment of ancient Roman concrete (right) collected from the archaeological site of Privernum, Italy (left). A calcium-rich lime clast (in red), which is responsible for the unique self-healing properties in this ancient material, is clearly visible in the lower region of the image. (Credits:Courtesy of the researchers at MIT)