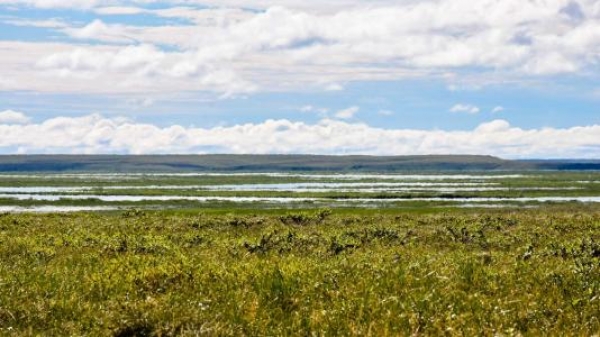 Since 1979, the Arctic has warmed nearly four times faster than the Earth as a whole due to climate change.

Since 1979, the Arctic has warmed nearly four times faster than the Earth as a whole due to climate change. Rising temperatures have reduced the extent of sea ice and permafrost, decreased snow cover, and altered plant communities in the Arctic. These changes can impact how energy moves between the land and the atmosphere in the region, which subsequently affects weather and temperature patterns around the world.

A recent study from researchers across 63 institutions, including the U.S. Department of Energy’s (DOE) Argonne National Laboratory and the DOE Office of Science Atmospheric Radiation Measurement (ARM) user facility, evaluated the impacts of various drivers on energy exchange, or the process by which energy moves between land and the atmosphere in the Arctic. They found that vegetation type, which is often simplified in climate models, is a primary predictor of how energy is exchanged during the Arctic summer.

“I expected there to be differences in vegetation type, but not to this extent,” said Ryan Sullivan, assistant atmospheric scientist at Argonne and co-author of the study. ​“Vegetation type had stronger predictive skill on the surface energy budget than permafrost, temperature, snow cover and cloud cover.”

Graminoid-dominated tundra with dwarf shrubs growing in national park Kytalyk, in the Siberian Arctic. The blurred areas in the image are created by heat haze, which occurs when various surfaces heat up differently and hence create turbulence in the air. (Photo Credit: Gabriela Schaepman-Strub/University of Zurich.)