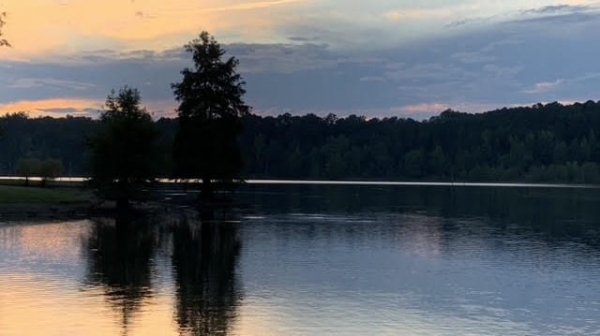 In areas near Raleigh projected to see heavier future development, keeping buffers of trees or other greenery around waterways could help slow rushing streams during wet conditions, and keep them flowing during dry ones.

In areas near Raleigh projected to see heavier future development, keeping buffers of trees or other greenery around waterways could help slow rushing streams during wet conditions, and keep them flowing during dry ones. However, North Carolina State University researchers behind a recent study warned these so-called “riparian buffers” would not be a magic bullet for managing water as development increases and the climate grows warmer and wetter.

“Buffers are good for watersheds – there’s a lot of literature that shows that they’re great for water quantity and also for quality,” said the study’s lead author Elly T. Gay, a graduate student in forestry and environmental resources at NC State. “But in the future, buffers in isolation may not be viable as the only option to mitigate negative consequences that increased development and more variable climate might have on water quantity; they need to be coupled with other management strategies.”

Forests can filter water, and they can also slow water down to prevent floods or keep water levels up during droughts, said the study’s co-author Katherine Martin, assistant professor of forestry and environmental resources at NC State. Alternatively, stream flows can be more extreme in urban areas with more paved surfaces. Riparian buffers are one tool to help manage water in urban areas.

“Urban hydrology is a lot more flashy,” Martin said. “When it rains, and you have an area with a lot of buildings and roads, the rainfall goes immediately into the streams. There’s not a lot of time for it to seep into the ground. In forests, the water is filtered through the soil, and used by plants. It’s a slower process of getting the water to the stream, even if it’s not raining. That’s important for aquatic species, so they have enough water. When stream levels are low, pollutants get concentrated.”