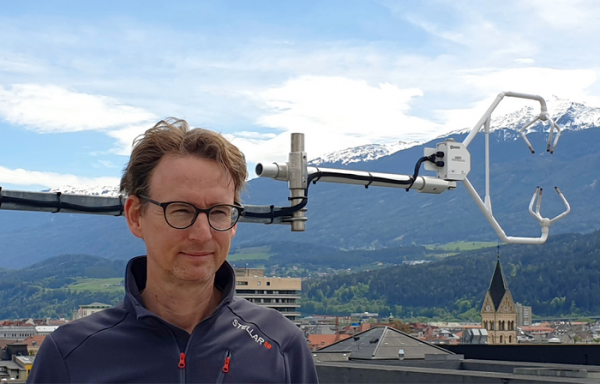 Long-term measurements in the urban area of Innsbruck, Austria, show that the fraction of ozone near the surface tends to be overestimated in atmospheric models.

Long-term measurements in the urban area of Innsbruck, Austria, show that the fraction of ozone near the surface tends to be overestimated in atmospheric models. Consequently, a fundamental assumption for air quality forecasting has to be reinterpreted for urban areas. Measurements by an international team led by atmospheric scientist Thomas Karl of the University of Innsbruck also show that direct nitrogen dioxide emissions are overestimated.

The 40-meter-high monitoring tower of the Innsbruck Atmospheric Observatory near the city center of Innsbruck in Austria, Europe, continuously provides data on the composition of the atmosphere near the surface. Every hour, 36,000 data points are recorded. Using a special measuring method – the so-called eddy covariance method – the concentration of air components can be continuously monitored. An international team led by Thomas Karl from the Department of Atmospheric and Cryospheric Sciences at the University of Innsbruck has now used these data to study the chemistry of ozone, nitrogen monoxide and nitrogen dioxide in urban areas in detail. The high proportion of diesel vehicles in European cities leads to strong concentrations of nitrogen monoxide. This reacts with ozone to produce nitrogen dioxide. In the atmosphere, nitrogen dioxide decomposes again to nitrogen monoxide and atomic oxygen, which immediately combines with atmospheric oxygen to form ozone.

Read more at: University of Innsbruck