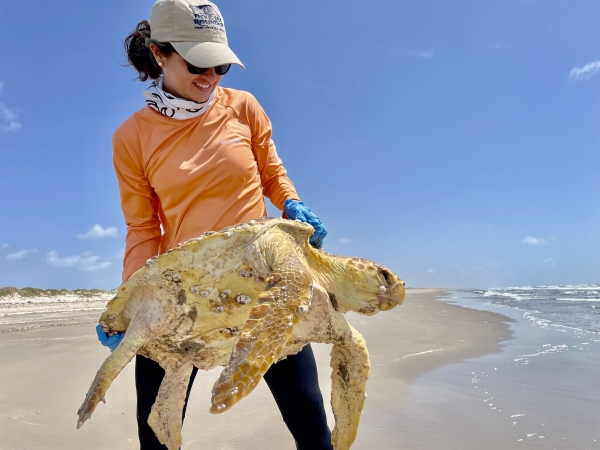 More than 100 people gathered recently along the Padre Island shore in Texas to witness eight healed and robust sea turtles being released into the waters of the Gulf Coast.

More than 100 people gathered recently along the Padre Island shore in Texas to witness eight healed and robust sea turtles being released into the waters of the Gulf Coast. The event was a welcome bit of good news during a very challenging time. Over just 11 months, a record 433 loggerhead turtles have been found stranded along the Texas coast—a nearly fourfold increase over the 2012-2021 annual average of loggerhead strandings (109). A team of scientists from the Amos Rehabilitation Keep, Mission-Aransas National Estuarine Research Reserve, and other organizations are working hard to rescue these creatures, nurse them back to health, and solve the mystery of their high stranding rates.

When found, roughly two-thirds of the turtles are dead, and the rest are extremely emaciated.

“The public is our primary way of hearing about stranded sea turtles. Once a citizen contacts us, we have staff and volunteers that go out and rescue the turtles,” says Jace Tunnell, the director of Mission-Aransas Research Reserve. “Back at the Amos Rehabilitation Keep, we assess the animals for injuries, parasites, malnutrition, and other problems. You can think of the rehab facility as an emergency room where animals come in with all kinds of injuries and illnesses to be treated by our veterinarians and staff. We then distribute the sea turtles to other partner facilities to help in the rehab process. It’s a true team effort to save these amazing animals.”