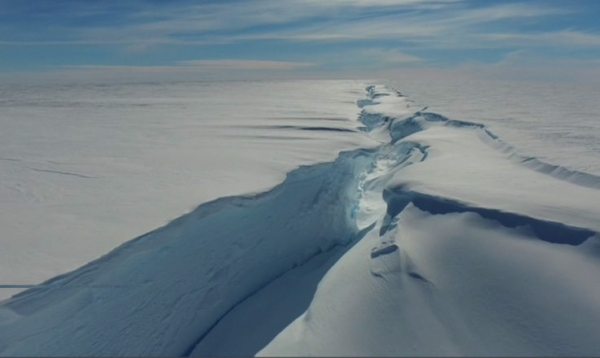 A huge iceberg (1550 km²), almost the size of Greater London, has broken off the 150m thick Brunt Ice Shelf.

A huge iceberg (1550 km²), almost the size of Greater London, has broken off the 150m thick Brunt Ice Shelf. It calved after cracks that have been developing naturally over the last few years extended across the entire ice shelf, causing the new iceberg to break free. This occurred on Sunday 22 January between 19.00 and 20.00 UTC during a spring tide.

The iceberg calved when the crack known as Chasm-1 fully extended through the ice shelf. The break off is the second major calving from this area in the last two years and has taken place a decade after scientists at British Antarctic Survey (BAS) first detected growth of vast cracks in the ice.

The Brunt Ice Shelf is the location of BAS Halley Research Station. BAS glaciologists, who have been monitoring the behaviour of the ice shelf, say that the area of the ice shelf where the research station is located currently remains unaffected by the recent calving events.

The glaciological structure of the Brunt Ice Shelf is complex, and the impact of calving events is unpredictable. In 2016, BAS took the precaution of relocating Halley Research Station 23 km inland of Chasm-1 after it began to widen.