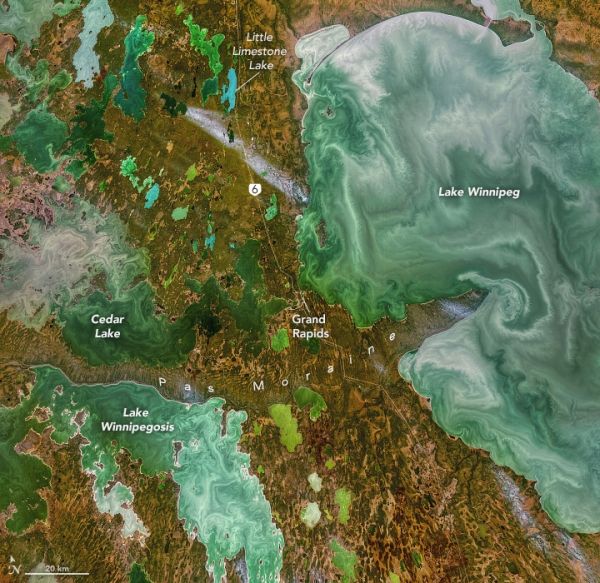 The lakes, wetlands, and glacial landscape of Manitoba were shaped by glaciers and ice sheets.

The Manitoba Great Lakes—Winnipeg, Winnipegosis, and Manitoba— are smaller than their more famous Great Lake neighbors to the south, but they can claim more wetlands along their shores. Forty-three percent of the land area of the province of Manitoba, Canada, is covered by bogs, fens, marshes, swamps, and open shallow water.

The origins of the lakes and the wetlands can both be traced to the last ice age. The modern wetlands result from the region’s low-lying topography, which was leveled by advancing and retreating ice sheets. The three Manitoba Great Lakes, however, are actual remnants of glacial Lake Agassiz. This was an ice-dammed lake that formed south of the Laurentide Ice Sheet about 14,500 years ago. At its largest, Lake Agassiz was 1,125 kilometers (700 miles) long and 400 kilometers (250 miles) wide. As the ice dams melted and receded at the end of the ice age, about 8,000 years ago, outlets to the sea opened and the lake drained, leaving behind the deeper lakes we now call great.

The above image, acquired by the Operational Land Imager (OLI) on Landsat 8 on November 3, 2021, shows two of the three great lakes, along with Cedar Lake, in south-central Manitoba. (Note that Norman Kuring, a retired researcher from NASA’s Ocean Biology group applied color-filtering techniques to the image to draw out the fine details in the water. Those features are real but might not be as apparent to the unaided human eye.)