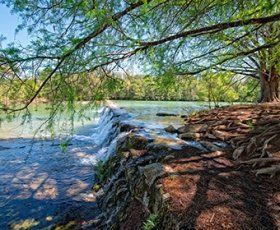 A new study by Chad Furl, postdoctoral research associate, and Hatim Sharif, professor of civil and environmental engineering at The University of Texas at San Antonio, delves into the 2015 Wimberley, Texas floods that destroyed 350 homes and claimed 13 lives. Furl and Sharif researched the factors that led to the catastrophic flooding and shed light on new ways people in flood-prone areas can protect against future tragedies.

On Memorial Day weekend in 2015, the Blanco River rose to a record 40 feet. The swift rise of the water is known as a flash flood, a term familiar to Texans. The Texas Hill Country, where Wimberly is located, is known as “Flash Flood Alley” because it leads North America as the most flash-flood prone region.

The rugged landscape tends to contribute to this moniker, in addition to urbanization. As natural areas become more and more developed, floods become more likely to occur because accumulating rainwater slides off concrete structures with nowhere to go, whereas plants and soil absorb that moisture. Furl and Sharif also say that flash floods are common in Texas due to its two heavy rain seasons in spring and fall that cause the soil to become oversaturated with rainwater.