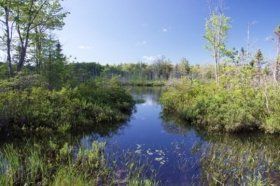 University of Wyoming researchers led a climate study that determined recent temperatures across Europe and North America appear to have few, if any, precedent in the past 11,000 years.

The study revealed important natural fluctuations in climate have occurred over past millennia, which would have naturally led to climatic cooling today in the absence of human activity.

Bryan Shuman, a UW professor in the Department of Geology and Geophysics, and Jeremiah Marsicek, a recent UW Ph.D. graduate in geology and geophysics, led the new study that is highlighted in a paper, titled “Reconciling Divergent Trends and Millennial Variations in Holocene Temperatures,” published today (Jan. 31) in Nature, an international weekly journal of science.

Marsicek, a current postdoctoral researcher at the University of Wisconsin-Madison, was lead author of the paper. He worked on the study from 2011-16. Other contributors to the paper were from the University of Oregon, University of Utah and the U.S. Geological Survey in Corvallis, Ore. The study was largely funded by a combination of fellowships from the Environmental Protection Agency and the UW NASA Space Grant Consortium, and grant support from the National Science Foundation (NSF).

Image: Little Pond, located in Royalston, Mass., was among 642 ponds or lakes in North America and Europe from which fossil pollen was collected to reconstruct temperatures. The reconstructions, which looked at climate in North America and Europe over the past 11,000 years, closely matched the climate simulations run by NCAR, which were conducted independently as part of separate projects. (Credit: David Foster)