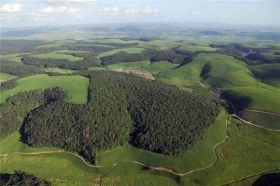 Tropical forests around the world play a key role in the global carbon cycle and harbour more than half of the species worldwide. However, increases in land use during the past decades caused unprecedented losses of tropical forest. Scientists at the Helmholtz Centre for Environmental Research (UFZ) have adapted a method from physics to mathematically describe the fragmentation of tropical forests. In the scientific journal Nature, they explain how this allows to model and understand the fragmentation of forests on a global scale. They found that forest fragmentation in all three continents is close to a critical point beyond which fragment number will strongly increase. This will have severe consequences for biodiversity and carbon storage.

In order to analyse global patterns of forest fragmentation, a UFZ research group led by Prof. Andreas Huth used remote sensing data that quantify forest cover in the tropics in an extremely high resolution of 30 meters, resulting in more than 130 million forest fragments. To their surprise they found that the fragment sizes followed on all three continents similar frequency distributions. For example, the number of forest fragments smaller than 10,000 hectares is rather similar in all three regions: 11.2 percent in Central and South America, 9.9 percent in Africa and 9.2 percent in Southeast Asia. "This is surprising because land use noticeably differs from continent to continent," says Dr. Franziska Taubert, mathematician in Huth's team and first author of the study. For instance, very large forest areas are transformed into agricultural land in the Amazon region. By contrast, in the forests of Southeast Asia, often economically attractive tree species are taken from the forest.

When searching for explanations for the identical fragmentation patterns, the UFZ modellers found their answer in physics. "The fragment size distribution follows a power law with almost identical exponents on all three continents," says biophysicist Andreas Huth. Such power laws are known from other natural phenomena such as forest fires, landslides and earthquakes. The breakthrough of their study is the ability to derive the observed power laws from percolation theory. "This theory states that in a certain phase of deforestation the forest landscape exhibits fractal, self-similar structures, i.e. structures that can be found again and again on different levels," explains Huth. "In physics, this is also referred to as the critical point or phase transition, which for example also occurs during the transition of water from a liquid to gaseous state," added co-author Dr. Thorsten Wiegand from UFZ. A particularly fascinating aspect of the percolation theory is that this universal size distribution is, at the critical point, independent of the small-scale mechanisms that led to fragmentation. This explains why all three continents show similar large-scale fragmentation patterns.