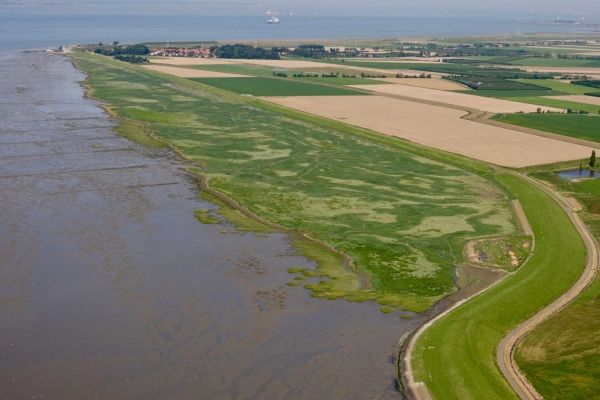 When Florence slogged ashore in North Carolina last week, coastal wetlands offered one of the best lines of defense against the hurricane’s waves and surge.

When Florence slogged ashore in North Carolina last week, coastal wetlands offered one of the best lines of defense against the hurricane’s waves and surge.

A new study predicts such wetlands will survive rising seas to buffer the world’s coastlines against future storms and provide their many other ecological and economic benefits, but only if humans preserve the room needed for the wetlands to migrate inland—what scientists call “accommodation space.”

The study, published in Nature the day before Florence made landfall, addressed a major uncertainty in how saltmarshes and mangroves will respond to sea-level rise. It was authored by an international research team with members in the U.K., U.S., Belgium, Germany, and Australia. Associate Professor Matt Kirwan of the Virginia Institute of Marine Science was the sole U.S.-based contributor.

The study’s lead author, Dr. Mark Schuerch of the U.K.-based University of Lincoln, says “Rather than being an inevitable consequence of global rising sea levels, our findings indicate that large-scale coastal wetland loss might be avoidable if sufficient additional space can be created by increasing the number of innovative ‘nature-based adaptation’ solutions to coastal management.”

Image: Barriers to wetland migration, such as this Dutch levee, are common in Europe and China. (Credit: © Rijkswaterstaat / Joop Van Houdt)