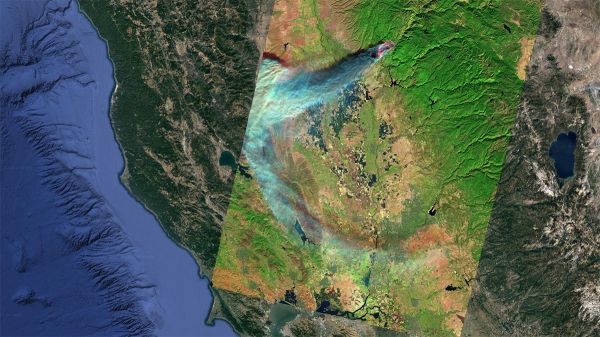 Satellite images of the area around Paradise, California, on the morning of Nov. 8 captured the Camp Fire when it was only four hours old, yet had already burned halfway through the city.

Overlaid with earlier high-resolution images of the city’s buildings and surrounding landscape, the images clearly indicate the buildings that had likely burned by 10:45 a.m. that Thursday, as well as the rapidly leapfrogging flames and the path of destruction the fire had created since its ignition at around 6:30 a.m. The northeastern, upwind edge of the burn lies beneath and parallel to three high-tension power lines running along Highway 70, about a mile and a half northeast of a town called Pulga and a site identified as a possible origin of the fire.

So far, the Camp Fire has scorched 140,000 acres, left at least 56 people dead and destroyed more than 8,700 residences, making it the most destructive fire in California history. It is only 40 percent contained.

The images were generated by Jeff Chambers, a UC Berkeley professor of geography, using Google’s Earth Engine, which combines an analysis platform and detailed base maps with large storage and daily downloads of publicly available Earth-imaging data from orbiting satellites. The Landsat 8 satellite happened to snap its once-every-16-days shot of that area at 10:45 a.m. on Thursday, Nov. 8.

The satellite recorded visible and infrared wavelengths. Short-wavelength infrared (SWIR) light (1.2- to 3-micron wavelength) is captured in two bands with Landsat 8, and these SWIR wavelengths are emitted by burning materials and penetrate smoke and aerosols, allowing a detailed picture of the fire’s progress. As assembled by Chambers, the infrared signature of fire is an eerie red wash over Earth Engine’s base map of homes and businesses in Paradise.

“It’s astonishing,” Chambers said. “You can see the fire burning right through the city. The burn front at 10:45 a.m. on Thursday morning was that far into the city. Earth Engine tools allow this type of rapid analysis, and I think it’s important to get this out there to the public right away.”