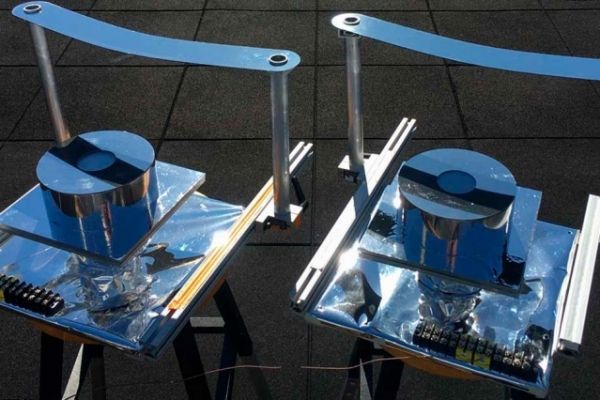 MIT researchers have devised a new way of providing cooling on a hot sunny day, using inexpensive materials and requiring no fossil fuel-generated power. The passive system, which could be used to supplement other cooling systems to preserve food and medications in hot, off-grid locations, is essentially a high-tech version of a parasol.

The system allows emission of heat at mid-infrared range of light that can pass straight out through the atmosphere and radiate into the cold of outer space, punching right through the gases that act like a greenhouse. To prevent heating in the direct sunlight, a small strip of metal suspended above the device blocks the sun’s direct rays.

The new system is described this week in the journal Nature Communications in a paper by research scientist Bikram Bhatia, graduate student Arny Leroy, professor of mechanical engineering and department head Evelyn Wang, professor of physics Marin Soljačić, and six others at MIT.

In theory, the system they designed could provide cooling of as much as 20 degrees Celsius (36 degrees Fahrenheit) below the ambient temperature in a location like Boston, the researchers say. So far, in their initial proof-of-concept testing, they have achieved a cooling of 6 C (about 11 F). For applications that require even more cooling, the remainder could be achieved through conventional refrigeration systems or thermoelectric cooling.

Image: Two versions of the device designed by MIT researchers, using a strip of metal to block direct sunlight, were built and tested on the roof of an MIT building to confirm that they could provide cooling well below ambient air temperature. (Credit: Photo by Bikram Bhatia)