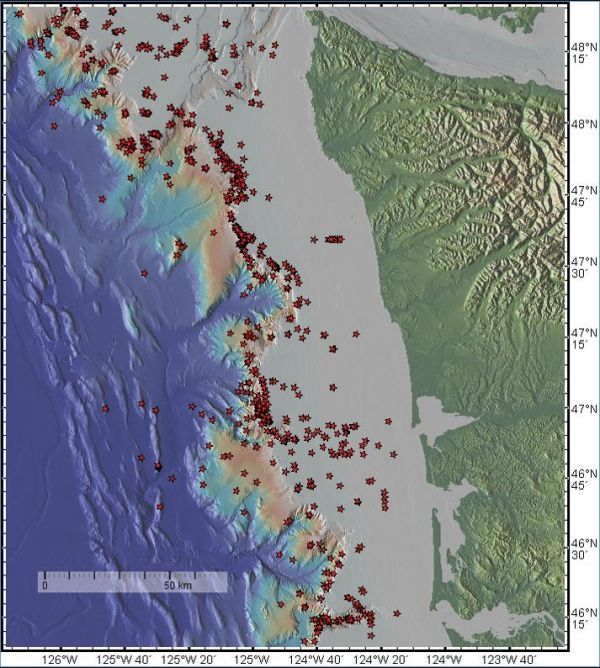 Off the coast of Washington, columns of bubbles rise from the seafloor, as if evidence of a sleeping dragon lying below.

Off the coast of Washington, columns of bubbles rise from the seafloor, as if evidence of a sleeping dragon lying below. But these bubbles are methane that is squeezed out of sediment and rises up through the water. The locations where they emerge provide important clues to what will happen during a major offshore earthquake.

The study, from the University of Washington and Oregon State University, was recently published in the Journal of Geophysical Research: Solid Earth.

The first large-scale analysis of these gas emissions along Washington’s coast finds more than 1,700 bubble plumes, primarily clustered in a north-south band about 30 miles (50 kilometers) from the coast. Analysis of the underlying geology suggests why the bubbles emerge here: The gas and fluid rise through faults generated by the motion of geologic plates that produce major offshore earthquakes in the Pacific Northwest.

“We found the first methane vents on the Washington margin in 2009, and we thought we were lucky to find them, but since then, the number has just grown exponentially,” said lead author Paul Johnson, a UW professor of oceanography.