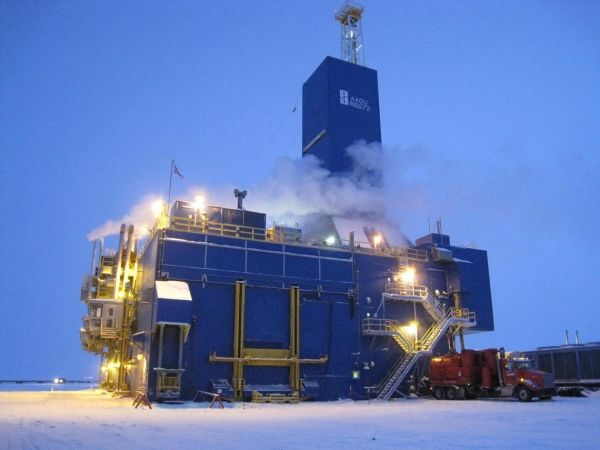 In the far north of Alaska, near the giant Prudhoe Bay oil field, an international research consortium has been studying the potential of an altogether different energy source.

In the far north of Alaska, near the giant Prudhoe Bay oil field, an international research consortium has been studying the potential of an altogether different energy source.  In late December of 2018, drilling operations confirmed the existence of two high-quality reservoirs that were fully saturated with a potential alternative fuel source: gas hydrate.

Gas hydrate, also known as methane hydrate, is made up of solid crystalline structures filled with methane gas.  Because it requires very specific temperatures and pressure to exist, gas hydrate is usually found either in permafrost regions or beneath the sea in sediments of the outer continental margins. Because of its potential as an energy source, gas hydrate has garnered increasing attention as governments and companies seek to explore its potential.

The number of technical discoveries regarding gas hydrate has advanced at a rapid pace in recent years.  As a leading voice in international gas hydrate research, the U.S. Geological Survey has contributed substantially to the discourse.  The recent revelations from the test well near Prudhoe Bay are the latest step in a productive partnership between the USGS, the Department of Energy (DOE) through the National Energy Technology Laboratory, and the Japan Oil, Gas and Metals National Corporation, also known as JOGMEC.

The Alaska North Slope has long been a focus for gas hydrate research.  In 2008, the USGS published the very first assessment of technically recoverable gas hydrate resources there, estimating 85 trillion cubic feet of natural gas that could be recovered from hydrate-bearing formations throughout the region.