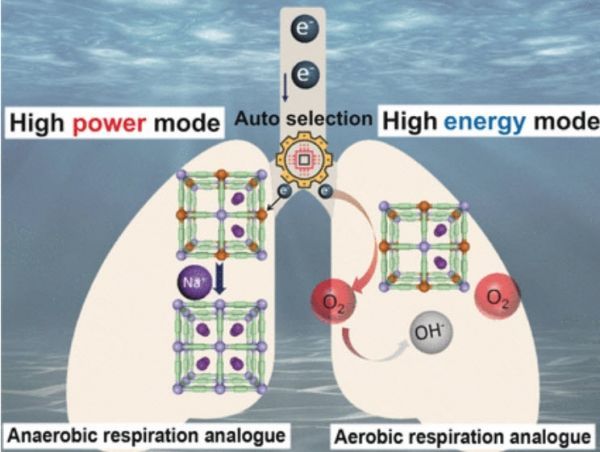 Underwater vehicles, diving robots, and detectors require their own energy supply to operate for long periods independent of ships.

Underwater vehicles, diving robots, and detectors require their own energy supply to operate for long periods independent of ships. A new, inexpensive system for the direct electrochemical extraction of energy from seawater offers the advantage of also being able to handle short spikes in power demand, while maintaining longer term steady power. To do so, the system can autonomously switch between two modes of operation, as researchers report in the journal Angewandte Chemie.

Charting submarine landforms, currents, and temperatures, and inspecting and repairing pipelines and deep-sea cables are just a few examples of tasks carried out autonomously by underwater devices in the depths of the ocean. Under these extreme conditions, the challenge for power generators is to produce both a high energy density (long run time with basic power use) and high-power density (short-term high current flow) for activities such as rapid movement or action of a gripper.

Liang Tang, Hu Jiang, and Ming Hu and their team from the East China Normal University in Shanghai, Shanghai University, and the Chinese Research Academy of Environmental Sciences in Beijing, China, have taken inspiration from marine organisms that can switch their cell respiration between aerobic and anaerobic modes by using different materials as electron acceptors. The researchers have designed a new power generator that works by the same principles.