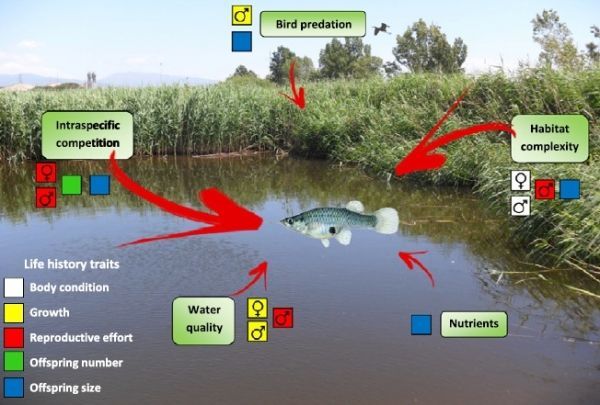 Preventing the introduction of the mosquitofish and removing its population are the most effective actions to control the dispersal of this exotic fish in ponds and lakes, according to a study published in the journal Science of the Total Environment. Neither the presence of predators nor the degradation of the quality of water and natural habitat are a threat to this invasive species –from the Atlantic coast in North America- which competes against and moves local species away.

The new study, carried out in water ecosystems close to urban environments of the Barcelona provincial area, is signed by the experts Oriol Cano Rocabayera, Adolfo de Sostoa, Lluís Coll and Alberto Maceda, from the Faculty of Biology and the Biodiversity Research Institute of the UB (IRBio).

The mosquitofish (Gambusia holbrooki) is an edacious exotic fish regarded as one of the most dangerous invasive species at a global scale according to the International Union for the Conservation of Nature (UICN). It was brought to Spain in 1921 for the biological control of mosquitoes –carrying diseases such as malaria- and is now included in the catalogues of exotic invasive species of the Ministry of Agriculture, Fisheries and Food and the autonomous communities.

Read more at University of Barcelona