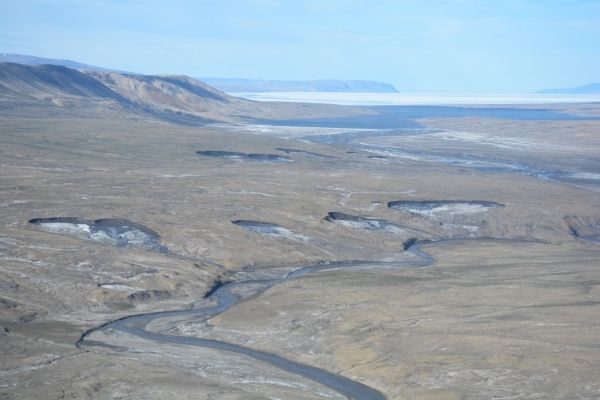 Rapid changes in terrain are taking place in Canada’s high Arctic polar deserts due to increases in summer air temperatures.

Rapid changes in terrain are taking place in Canada’s high Arctic polar deserts due to increases in summer air temperatures.

A McGill-led study published recently in Environmental Research Letters presents close to 30 years of aerial surveys and extensive ground mapping of the Eureka Sound Lowlands area of Ellesmere and Axel Heiberg Islands located at approximately 80 °N. The research focuses on a particular landform (known as a retrogressive thaw slump) that develops as the ice within the permafrost melts and the land slips down in a horseshoe-shaped feature. The presence of these landforms is well documented in the low Arctic. But due to the extremely cold climate in high Arctic polar deserts (where average annual ground and air temperatures are -16.5 °C/2.3 °F, and -19.7 °C /-3.46 °F, respectively), and the fact that the permafrost is over 500 metres (or about 1/3 of a mile) thick, it had been assumed this landscape was stable. But the McGill-led research team found that this has not been the case.