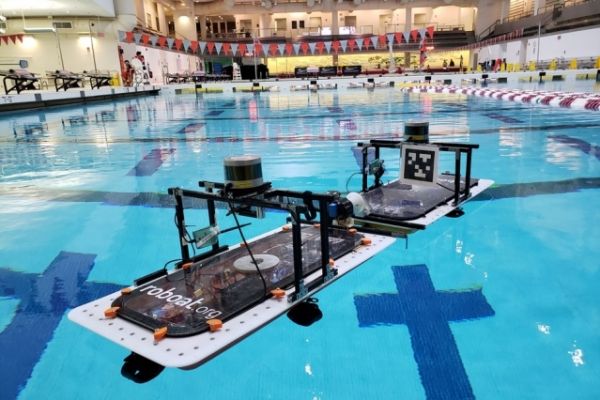 The city of Amsterdam envisions a future where fleets of autonomous boats cruise its many canals to transport goods and people, collect trash, or self-assemble into floating stages and bridges.

To further that vision, MIT researchers have given new capabilities to their fleet of robotic boats — which are being developed as part of an ongoing project — that lets them target and clasp onto each other, and keep trying if they fail.

About a quarter of Amsterdam’s surface area is water, with 165 canals winding alongside busy city streets. Several years ago, MIT and the Amsterdam Institute for Advanced Metropolitan Solutions (AMS Institute) teamed up on the “Roboat” project. The idea is to build a fleet of autonomous robotic boats — rectangular hulls equipped with sensors, thrusters, microcontrollers, GPS modules, cameras, and other hardware — that provides intelligent mobility on water to relieve congestion in the city’s busy streets.

One of project’s objectives is to create roboat units that provide on-demand transporation on waterways. Another objective is using the roboat units to automatically form “pop-up” structures, such as foot bridges, performance stages, or even food markets. The structures could then automatically disassemble at set times and reform into target structures for different activities. Additionally, the roboat units could be used as agile sensors to gather data on the city’s infrastructure, and air and water quality, among other things.

Image: MIT researchers have given their fleet of autonomous “roboats” the ability to automatically target and clasp onto each other — and keep trying if they fail. The roboats are being designed to transport people, collect trash, and self-assemble into floating structures in the canals of Amsterdam.  Courtesy of the researchers