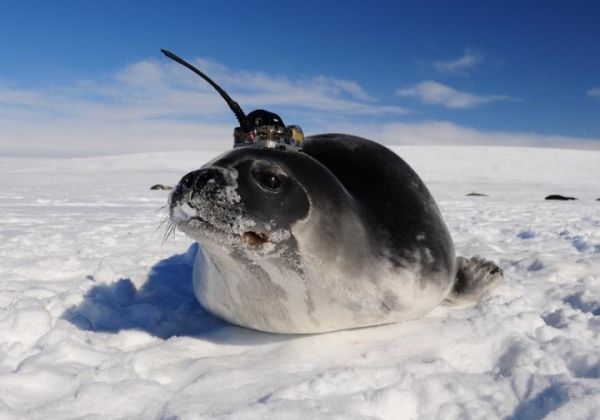 The winter ice on the surface of Antarctica’s Weddell Sea occasionally forms an enormous hole.

The winter ice on the surface of Antarctica’s Weddell Sea occasionally forms an enormous hole. A hole that appeared in 2016 and 2017 drew intense curiosity from scientists and reporters. Though even bigger gaps had formed decades before, this was the first time oceanographers had a chance to truly monitor the unexpected gap in Antarctic winter sea ice.

A new study led by the University of Washington combines satellite images of the sea ice cover, robotic drifters and even seals outfitted with sensors to better understand the phenomenon. The research explores why this hole appears in only some years, and what role it could play in the larger ocean circulation.

The study was published June 10 in the journal Nature.

“We thought this large hole in the sea ice — known as a polynya — was something that was rare, maybe a process that had gone extinct. But the events in 2016 and 2017 forced us to reevaluate that,” said lead author Ethan Campbell, a UW doctoral student in oceanography. “Observations show that the recent polynyas opened from a combination of factors — one being the unusual ocean conditions, and the other being a series of very intense storms that swirled over the Weddell Sea with almost hurricane-force winds.”

Ocean measurements were also collected by seals swimming under the sea ice with temporary satellite tags, showing normal water conditions in the years that did not have large polynyas. (Credit: Dan Costa/University of California, Santa Cruz)